Our Black Label CBG hemp flower contains 14-15% CBG and only 0.18% THC, well under the .30% limit. It has a fresh citrus aroma with floral overtones and a tremendous terpene profile. Black Label is a truly premium smokable CBG hemp flower trimmed by hand and slow cured at Blacklands Botanicals.

Black Label hemp buds are covered in dense crystalline trichomes.  These trichomes are where much of the cannabinoids and terpenes produced come from.  As hemp plants begin to flower, trichomes form along the outer surface of the plant.  Concentration of trichomes varies among varieties and is dependent on both genetics and growth environment.  We harvest our Black Label CBG at the very peak of production.

Cannabigerol (CBG) is the chemical precursor to several other major cannabinoids, including CBD and THC. CBG was found only in trace amounts in most strains, but more recently, growers have selectively bred varieties high in CBG. Like CBD, it is a non-psychoactive cannabinoid.

While CBD does not bind directly to CB1 and CB2 receptors, CBG interacts directly with them. It inhibits any psychoactive effects of THC and may also block serotonin receptors. Because of this, it has been studied as an anti-depressant and possible anti-anxiety treatment.

On its own, CBG has unique properties, but when paired with other cannabinoids and terpenes, even those present in only trace amounts, it can contribute to the Entourage Effect.

Premium Black Label CBG hemp flower contains an abundance of CBG with smaller amounts of CBC and CBD. Terpenes include Pinene, Myrcene, Limonene, Linalool, Caryophyllene, Humulene, Bisabolol, and several others as shown on the Terpene Profile report below. 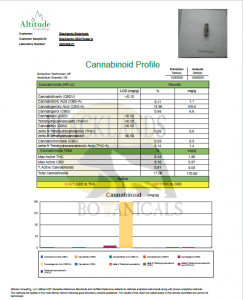 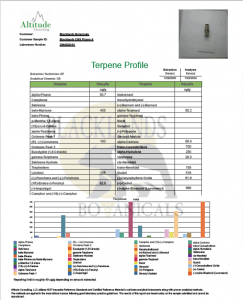