Full-spectrum CBD (Hemp) oil refers to oil that contains all of the original cannabinoids and compounds found in the natural hemp plant. Other compounds found in full spectrum oil are proteins, chlorophyll, fiber, vitamins and minerals, as well as terpenes.

The 8 major cannabinoid acids produced by the hemp plant are:

These acids are synthesized by the hemp plant, and these cannabinoid acids must be activated through decarboxylating (heating) to yield the compounds that patients are after (CBD in the case of industrial hemp and THC in the case of medical cannabis.) The major cannabinoid acids are CBGA, THCA, CBDA, and CBCA. Each of these has a corresponding “V” compound with shorter chemical structures CBGVA, THCVA, CBDVA, and CBCVA.

Full spectrum hemp oil also contains vitamins A, C, E, and B complex vitamins such as riboflavin, thiamine and niacin, as well as beta-carotene. Minerals contained in full spectrum hemp oil are magnesium, zinc, potassium, calcium, phosphorous, and iron. Omega 3 and Omega 6 fatty acids are also present at the recommended 3:1 ratio whereas the typical American diet only contains a 25:1 ratio.

What is the difference? When referring to Full Spectrum CBD or “whole plant” it means that the CBD product contains all of the cannabinoids listed above. Remember that CBD products contain minute amounts of THC (less than 0.3%) resulting in minimal to no psychoactive effects.

CBD isolate on the other hand is purified CBD that has been extracted and isolated from the other cannabinoid compounds. Why is this important? CBD offers the most benefits of all of the cannabinoids combined. However, is CBD alone more effective than CBD combined with the other cannabinoids present in full spectrum? Recent studies in Jerusalem at the Lautenberg Center for general Tumor Immunology showed that full spectrum CBD offered greater relief to the data group using full spectrum than the group receiving the isolate. It was also demonstrated that increasing doses of full spectrum CBD offered increased relief whereas the increased dose in isolate did not offer the same increased relief.

So why chose one over the other? You may not need the full capabilities of full spectrum CBD. Also, it is possible that other cannabinoids may cause negative reactions whereas isolated CBD would not in certain cases. If suffering from a severe condition it is always best to consult a medical professional before choosing full spectrum or isolate. 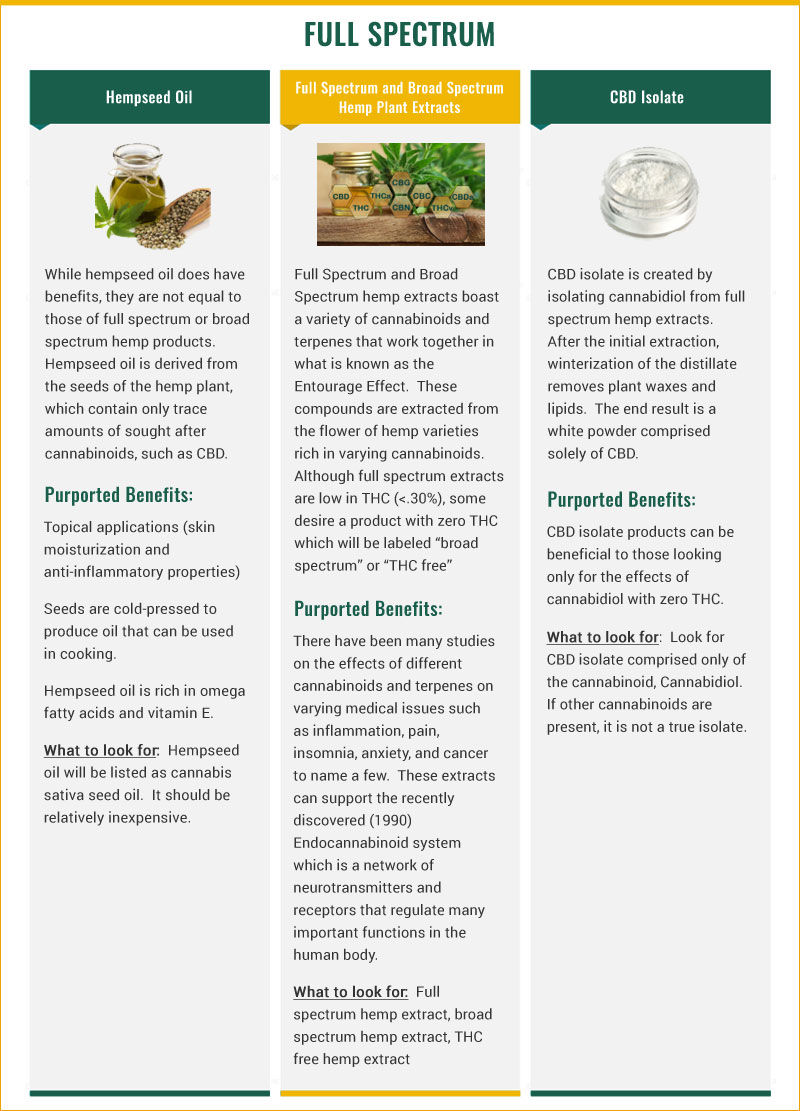 What are terpenes? Terpenes are essential oils (aromatic organic compounds) found in high CBD hemp, cannabis, many other plants and herbs, and even in some insects. Terpenes are naturally occurring compounds that plants developed to ward off herbivores that may eat them, and to attract beneficial insects, predators, and pollinators. Hemp plants, especially high CBD strains, have naturally high levels of these terpenes.

Why are terpenes important?

1. They can have a direct, positive affect on the effects of your full spectrum CBD oil.

2. They have medical benefits such as anti-inflammatory, anti-cancer, analgesic, sedative effects, and anti-depressive properties.

3. Terpenes are what gives hemp its flavor and aroma.

4. Terpenes work together with the cannabinoids in what is known as the “Entourage Effect”. They work together to make the whole much more effective than the individual components.

Over 200 terpenes have been found in hemp, but only a few are found in amounts large enough to be noteworthy. Different types of terpenes are monoterpenes, diterpenes, and sesquiterpenes. These are determined by the number of repeating units of a 5-carbon molecule called isoprene.

These are a few of the most common terpenes:

Limonene: Has anti-depressant properties, is highly energizing, and has citrusy notes

Myrcene: One of the most common terpenes in hemp, it is known for its sedative effects.

Beta-Caryophylene: Anti-inflammatory properties with a peppery taste. It is a sesquiterpene also found in the oil of black pepper, oregano, and many green leafy vegetables. Beta-carophylene has a binding affinity for the CB2 receptor and is known as a dietary cannabinoid as documented by Swiss scientist Jürg Gertsch in 2008. It is the only terpenoid known to activate a cannabinoid receptor.

Alpha-Pinene: Effects are energetic with pine-like notes. This terpene is common in pine.

Linalool: Sedative effects, as well as anxiety relief, and anti-depressive. It has a citrusy, floral note.

Having the ability to identify which terpenes are in your full spectrum high CBD oils and extracts will allow you to make the right decision for the product that will best work for you. 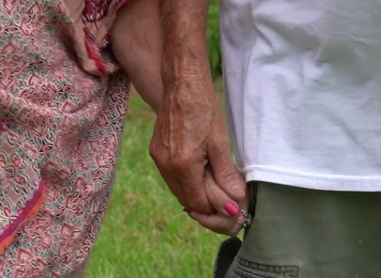 As a Vietnam combat veteran, I am always in pain of some sort, whether it be shoulder pain, back pain, or hip pain. CBD oil really helps minimize the pain and helps with inflammation. - John L.